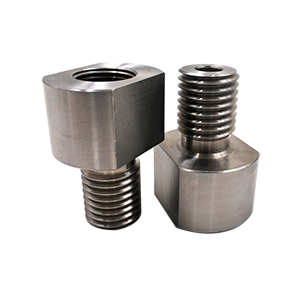 Waterjet HP Gland 10107910KMT Waterjet high pressure sealing head gland.The parts number is 10107910.The style is ball style only.Used on KMT SL-III units,It is pressure is 55,000 pis.This Waterjet intensifier part HP Gland is mounted on the plug at the front end of the waterjet high pressure cylinder.Super hardness water cut one-way valve,10107910, according to a lot of customer experience, you can rest assured purchase.HP Sealing Head Gland KMT Waterjet Gland，HP Sealing Head Gland, Ball Style Only.Used on SL-III units. 55,000 psi，KMT Waterjet Gland has many shape and model. we can distinguish them accornding to their shape and part number. The HP Gland feature is that there are only two planes, used for installation planes. Their part number is 10107910. You can send picture or part number to confirm, we have special technical person to answer for you.

We provide customers with a lot of robot waterjet cutting and 2D platform waterjet cutting related video, video can be more intuitive to reflect the way you need to work, any need to consult us!

Win-Win Waterjet Co., Ltd, is a company focusing on the new generation of Waterjet Cutting System and Robotic Waterjet Cutting Station. As professional manufacturer in China, we are providing you various solutions for your Robotic Waterjet Cutting Workstation building, also suppling the related spare parts suitable to Common Brands in the world (such as KMT, FLOW, ACCUSTREAM, JET EDGE, BFT). As result of research and development, we have become a massy Group combined with Design, Workshop, Warehouse, Technical Guide and International Sales Service Team.

If any problems, please leave your message and contact information for allowing us to communicate in time：
whatAPP&Telephone：+86 18840677446